By KenaiBackcountryAdventuresDecember 31, 2015Wildlife
No Comments

ESTURARIES Where rivers and streams join the sea, estuaries are created. Flooded by the twice-daily high tides, estuaries are mixing areas where fresh and salt water meet.

Life is abundant in estuaries. Marine worms, small crabs, insects, small clams and shrimp-like crustaceans thrive in the mud and silt, and are eaten by birds, fish and other wildlife. Kelp, green algae, eelgrass and other aquatic vegetation feed waterfowl and serve as rearing areas for young salmon. The meadow-like areas above all except the highest tides are characterized by salt-tolerant plants such as sedges, beach rye and goose-tongue. Sloughs meander through these wetland meadows, filling and draining as the tides change. Sculpin and flounder share these sloughs with salmon fry and threespine sticklebacks, small fish tolerant of fresh and salt water. Estuaries are important feeding areas for migrating waterfowl and shorebirds, and are year-round home to a variety of birds and animals. Estuaries are so fertile and productive that they export nutrients to the surrounding areas, enriching the ocean.

The temperate rainforests and boreal forests of the Kenai Peninsula climb from sea level to an elevation of about 2,500 feet, although the treeline varies depending on the aspect or direction of slope. At about 1,500 feet, subalpine trees such as mountain hemlock begin to appear in the forest. At about 2,500 feet, trees thin out and become scraggly, and the forest gives way to sub-alpine meadows, and then open alpine tundra.Just above the treeline, patches of ferns and stands of scrubby mountain hemlock and spruce are interspersed with lush meadows. Bear, ptarmigan and others visit this sub-alpine habitat, feeding on the abundant and nutritious herbs, flowers and forbs. Crystal-clear streams course through the meadows, and lakes and shallow ponds are nestled into pockets.

Above the sub-alpine zone, a rocky, green-gray landscape stretches across the upper slopes and runs along the ridges. This is referred to as alpine, or alpine tundra. In winter, the alpine is a cold, windy and inhospitable place, but in summer it is visited by a number of birds and mammals. Alpine tundra features a ground cover of hardy, low-lying plants such as heather, moss campion and crowberry. Lichens cling to the rocks.

Golden eagles, which favor open environments, are sometimes seen in the alpine zone. Ravens and bald eagles ride thermal air currents three and four thousand feet upslope and circle and soar along the ridges. Wolves, bears, and wolverines visit this high country and cross over passes or follow ridges as they move to different areas.

A few animals make their homes on these open ridges and slopes. Flocks of ptarmigan—hardy, chicken-like birds—are fairly common in this high country and nest on the ground in early summer. Marmots dig their dens in talus slopes and under rock outcrops, fattening on the summer vegetation and hibernating during the winter. Mountain goats and Dall sheep are the masters of this realm, and their white coats may be spotted against the green slopes or dark cliffs. Winter storms may force them down to the shelter of the upper treeline (and occasionally even farther downslope), but otherwise they generally prefer the exposed, open, high country, where their agility helps them outmaneuver predators. 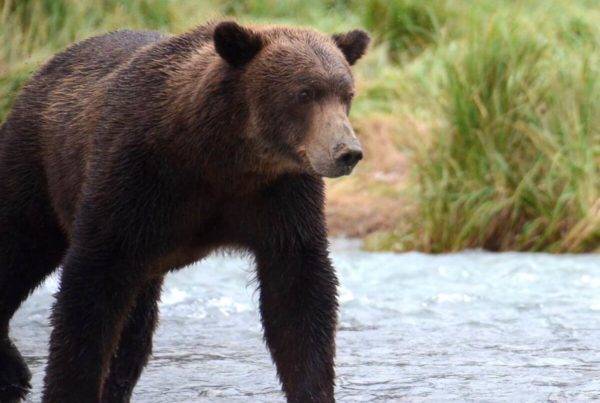 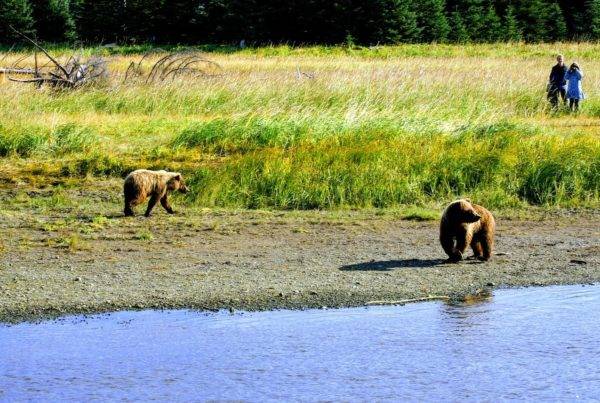 VIDEO: A Day on the Lake Clark National Park Coastline 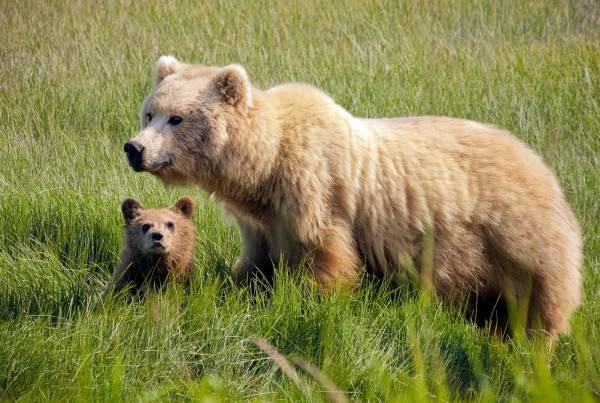